During July 2017 Arc Environmental Limited were tasked to investigate a surface collapse feature which appeared suddenly close to a major infrastructure.  There was a legacy of historical underground and surface coal mining at the site. 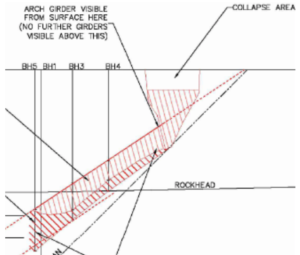 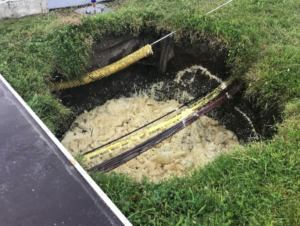 Investigation works in the form of rotary open hole boreholes were completed over a three-day period.  The area was surveyed indicating the positions of the boreholes and all other relevant features. In addition to the surface features, abandoned mine plans of the vicinity were obtained from the Coal Authority.

Available mine plans indicated that the collapse was at the location of drift entrance / adit (entrance to an underground mine) which was reported on the Yard Seam Plan to be at a gradient of 1 in 1 based on the Yard Seam workings, up to the surface.

Several boreholes identified the drift / adit which also indicated broken ground (backfill or collapsed roof material).  Voiding was present up to 2.00m above the broken ground.

Some boreholes encountered steel in the roof structure of the drift / adit.  These roof positions indicated, along with the depth to the floor of the drift, that the gradient was possibly less (around 1 in 1.5) than the reported gradient.

Following on from the drilling, a steel conduit was inserted into the void at regular spacings to allow for resin foam to be injected. Pressure injection was carried out using a void filling resin.

The whole process from discovering the collapse to treatment and the reopening of the infrastructure took just six days resulting in minimal disruption to the site.

Due to Arc Environmental Limited’s prompt response in investigating and remediating the surface collapse a further c.£100k of desk based and intrusive coal mining assessment work was commissioned for the site.